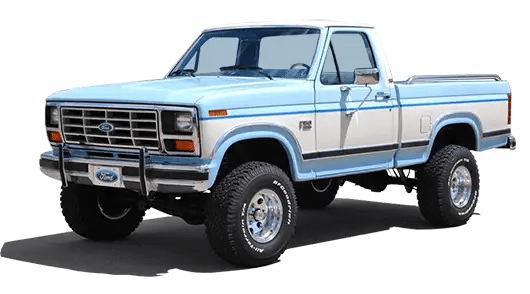 The 1980 F-Series was redesigned with an all-new chassis and larger body; this was the first ground-up redesign since 1965. The exterior styling of the truck was redone to improve aerodynamics and fuel economy. Medium-duty F-Series (F600-F900) were also redesigned; although they shared the cabin of the smaller pickup trucks, the largest version of F-Series now wore a bonnet with separate front wings (like the L-Series). Medium duty Ford F-Series would carry the 1980–1986 interior design until 2000 (though pickups were restyled again in 1987 and 1992), with very subtle changes such as window glass and electronics.

A noticeable change was made to the F-Series in 1982 as the Ford "Blue Oval" was added to the center of the grill. The Ranger and Custom trims were also no longer available. The Ranger name had been shifted onto the all-new compact pickup developed as a replacement for the Courier. The new trim levels were a no-badge base model (essentially the new Custom), XL, a very rare XLS, and XLT Lariat.

1986 marked the final year that the F-150 was available with a 3-speed manual gearbox that shifted via a steering column lever (3-on-the-tree). Incidentally, this was the second-last vehicle in the United States that offered this set up. 1986 was also the last year the Explorer package was available.

This is the first generation of trucks to incorporate amenities such as power mirrors, power windows, and power door locks.

The 1987 F-Series carried over the same body style from the seventh generation, yet sported a new rounded front clip that improved aerodynamics, as well as the softening of body lines around the rear of the bed and fender arches around the wheel wells. The interior was also completely redesigned in 1987. The 4-speed manual transmission was replaced during the year by a 5-speed Mazda M5OD for F-150s, and a heavy duty ZF5 for F-250s and F-350s. The 4-speed continued to be available as a customer-ordered option until 1989. Of course 3-speed and overdrive automatic transmissions were available as well. The Custom trim made a comeback for the eighth generation. The 4.9 Liter inline-six, 5.0 Liter V8, 5.8 Liter V8, and 7.5 Liter V8 engines all gained electronic fuel injection. In 1988 International Navistar also increased the displacement of their 6.9 Liter V8 in the same year, resulting in the new 7.3 Liter unit. In 1989, the C6 three-speed automatic was replaced as the base automatic transmission with the E4OD, a four-speed electronically controlled automatic overdrive unit, though the C6 was still available as an option, mostly in F-250s and F-350s, until 1997. Heavy-Duty models included F-250s and F-350s (along with F-Super Dutys) that were classified as incomplete vehicles only that were produced with no bed, but appeared as tow trucks, box trucks (notably U-Haul), flatbed trucks, dump trucks and other models.

For the 1992 model year, the body-shell of the 1980 F-Series was given another major upgrade. To further improve its aerodynamics, the forward bodywork was given a slightly lower hoodline, rounding the front fenders and grille; in addition, the changes matched the F-Series with the design of the newly introduced Explorer and redesigned E-Series and Ranger. Along with the exterior updates, the interior received a complete redesign.

Dormant since 1987, the FlareSide bed made its return as an option for 1992. To increase its appeal for younger buyers, the bed bodywork was redesigned, borrowing the sides of the F-350 dual-rear wheel bed (fitted to the narrower F-150 single-wheel chassis). To commemorate the 75th anniversary of the first Ford factory-produced truck (the 1917 Ford Model TT), Ford offered a 75th anniversary package on its 1992 F-series, consisting of a stripe package, an argent colored step bumper, and special 75th anniversary logos. In 1993, the 240 hp SVT Lightning was introduced as a specially-tuned performance truck; over 11,000 were built from 1993 to 1995.

In a trim shift, the XLT Lariat was dropped and combined with the XLT; the XL took over for the Custom trim after 1993 (marking the last usage of the Custom nameplate by Ford). In 1995, the Eddie Bauer trim made its return.

In 1995, the medium-duty Ford F-Series (F-600 through F-800 and all Ford B-Series) were given their first update since 1980. All versions (except severe-service) received a hood redesign which enlarged the grille and moved the turn signal indicators to the outside of the front headlights.

During the second half of 1997, the F-250 HD (heavy duty) was in the same series as the F-350. The body style stayed the same until the end of 1997. The only change of the F-250 HD and F-350 was that they no longer had classic style tailgates, with the stainless steel cap on them which read FORD. Instead the tailgate had the F-250 Heavy Duty/F-350 nameplate labeled on its left side, while Ford's blue oval was labeled on the right side (similarly styled like the 1997 Ford F-150 around this same time). The F-250 HD also had some minor changes in trim location, and options available. The 1997 F-250 HD with the 7.3 Powerstroke Diesel is also the rarest and most desirable of ninth generation Fords.

Following the introduction of the tenth-generation F-150, the F-250 and F-350 continued into production into the 1998 model year, becoming part of the Ford F-Series Super Duty line as they were replaced in 1999.