Eckler's warehouse is open, shipping daily and ready to meet all of your automotive needs. Curbside pickup is now available at our Florida location Learn More 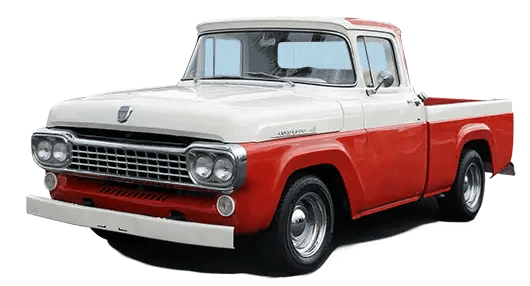 In 1957 the Ford trucks started to get a new look

The vehicles started to take on a more square design. The C-series now had a new grille near the front bumper, a cog-and-lightning bolt crest, and the brand FORD spelled out under the windshield. The third generation F-Series was introduced with new front fenders that were integrated with the body and a Styleside bed. The cab-over F-Series was now discontinued and replaced with tilt-cab C-series trucks.

Between 1958-1960 the C-series had a quad-headlight fascia, and then returned to the single headlight design in 1961, giving the C-series cab the look of the 1957 model. During this time Ford added a new Super Duty to the lineup.

In 1961 the H-Series was introduced as a way to get into the Class 8 COE market. The H-Series cab was higher and the front axle was moved forward under the driver side. The grille was larger. Nicknamed the Two Story Falcon, the H-Series had a stacked look and was produced through to 1966 when it was replaced by the new W-Series COE truck. The Ford H-Series trucks had the option of 401 cubic inch 2-barrel and 4-barrels, 477 2-barrel and 4-barrel, and 534 4-barrel Ford engines. The gas engine models were designated H or HT. Cummins engine options were also available in 674 cubic inch NH-180 and NH0195 diesels, or the 743 cubic inch NHE-180, NHE-195 or the NH-220. The NHE was an economy engine. The diesels had used the Cummins Pressure-Time fuel injection. There were also five different wheelbases offered, ranging from 126 inches through to 176 inches. The HDT-series Tandem axles were available in both 950 and 850 model classification models.

1961 was also the year of the fourth generation of F-Series trucks. With new engine and gearbox options, it was lower and longer in design, with a unibody that combined the cab and the bed. The unibody design was discontinued in the middle of 1963 due to poor sales. Some said that the doors would not open if the truck was overloaded. What did this mean for the model year? Some 1963 Ford F-Series trucks have the bed from the style used between 1957 to 1960. The 1963 and 1964 4x4 use the 1957-1960 bed.

In 1963 the C-Series now had the same cowl insignia of the rest of the heavy-duty and medium-duty trucks. The diesel C-Series was introduced, along with the N-Series and the Heavy-Duty F-Series. In 1964 the flare over the rear wheel arch was lengthened to extend all the way to the taillights. During this year the 300 cubic inch 4.9-liter engine and the 240 cubic inch 3.9-liter straight 6 was introduced. The 300 would be used through to 1996.

The 1965 F-Series truck would showcase a new frame, which would take hold through to 1979, while the body itself really remained unchanged for the most part. Truck enthusiasts and mechanics would note that a lot of the parts from the Ford F-Series of trucks between 1965-1979 are interchangeable. A Twin-I-Beam emblem on the front fender is seen on the 1965-1966 F-Series trucks. This suspension would be used on all of the Ford light-duty trucks and vans. A new 4-door crew-cab model was introduced in 1965. Added to the line was the Ranger, a higher level of styling package for the F-Series, with bucket seats from the Ford Mustang.