Eckler's warehouse is open, shipping daily and ready to meet all of your automotive needs. The 1960s would bring a new look and a new passion

The 1960s would bring a new look and a new passion for the full size Mercury line up. For 1960, the full size cars in the Mercury line were completely redesigned and, with the exception of the famous Y-block and MEL engines, carried over little from the previous year. Mercury retained the Park Lane as its top model, and continued offering the popular lower priced Monterey and Montclair models. In 1961 the Montclair and Park Lane were no longer in production in an effort to focus on making Mercury more cost effective. The Monterey took its place at the top of the lineup while the new Meteor, introduced in 1961, would bring up the rear at the bottom of the range.

The 1961 Meteor, originally meant to become the 1961 Edsel, got its name due to the excitement about the race to the moon happening during that time, and from a standalone model that was available in Canada in 1949. The Meteor 600 was offered as a 2-door and 4-door sedan, with chrome spears from the oblong tail lights to the front wheels. The Meteor 800, however, had three round tail lights on each side and was available as a 2-door and 4-door sedan and hardtop, with three chrome bars on the back fenders, chrome fender fin trim, back-up lights and rocker panel trim.

In 1962 the Meteor nameplate was moved to the intermediate line, so the Monterey 6, with a 135 horsepower 223 cu 3.7-liter Mileage Maker straight-six, was the full size Mercury price leader for that year. 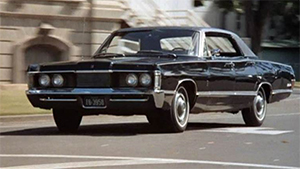 It was in 1963 that the new Breezeway window was reintroduced. This powered reverse rear window was first in the 1958-1960 Lincoln Continental and the Mercury Turnpike Cruiser. The 390 V8 with 250 horsepower was now standard, along with an optional 2-barrel carburetor with 300 horsepower 4-barrel, after the Mercury’s 6-cylinder, 292 and 352 V8 were discontinued.

The Marauder was introduced midway through 1963. This was the 1963 ½ Ford Sports Hardtop fastback roofline on a Mercury body. A big-block 300 horsepower 390 V8 and a new updated interior package was also now available, known as the S-55 performance package.

In 1964 the Montclair and the Park Lane were back. This meant the Monterey was once again designated as the entry-level full-size Mercury. Design wise, the Monterey given a bit more modest style, with a new grille and new tail lights. A 427 cu 7.0-liter with 410 hp engine replaced the 406.

A new torque-box frame and new designs came in 1965. The Breezeway window was now only available on the pillared sedans. The 2-door hardtops were fastbacks, except for a short lived notchback model that was discontinued part way through the year.

In 1966 there were two versions of the Mercury Monterey hardtop: a notchback version in the first half of the year and a fastback rear version window in the latter half of the year. Under the hood the Mercury had the 410 cu 6.7-liter and a 428 cu 7.0-liter FE engine.

In 1967 the Mercury Marquis was introduced to the full-size lineup, positioned with the Park Lane, but with higher quality standard equipment and nice plush interior trim. Both the 1967 Marquis and 1968 Marquis were offered as 2-door hardtops. The standard engine in 1967 was the Mercury 410 cu big-block V8 with 330 horsepower. In 1968 this was replaced by the 390 big-block with a 2-barrel carburetor and 315 horsepower. An optional 428 cu Super Marauder engine with 4-barrel carburetor was available in both 1967 and 1968.

Also on the road during 1967 and 1968 was the Park Lane Brougham, Ford’s top of the line Mercury. Available as a 4-door sedan, 4-door hardtop and, in 1968, a 2-door hardtop, this slick and luxurious powerhouse had super stylish door panels, better trim, pull straps and luxurious thick box pleating on 50-50 split bench seats. 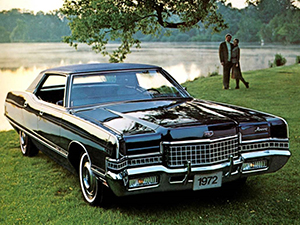 In 1969 a redesign came to give the Mercurys a new look to stand up against the Lincoln Continental in appearance. The wheelbase was extended to 124 inches. The station wagon, however, did not have its wheelbase extended. The 2-door hard top Mercury Marauder was also introduced in 1969, featuring a fastback roofline and a tunneled rear window. It was actually promoted as the Marauder X-100 and featured Kelsey-Hays road wheels, rear fender skirts, and a choice of Twin-Comfort lounge seats, bench seats, or bucket seats and u-shaped automatic transmission shifter in the floor console. Under the hood the Marauder X-100 had a 420 cu 7.0-liter engine (3-speed FMX automatic was optional), while the standard Marauder had a 390 cu 6.4-liter Ford FE engine with a manual 3-speed transmission.

There were not a lot of changes made for 1970, but in 1971 Mercury would have a facelift. Beaked grilles, new exterior door handles, wider fender skirts (not on the wagon or base Monterey), and frameless windows on the sedans would give the line a new look. A new moon-roof option was available for the Monterey and the Marquis as the convertible style for each was discontinued. Other changes for the Monterey and Marquis included new egg-crate design grilles, and a new front seatbelt warning buzzer. 1971 was the final year for the 390 V8, as the 351 V8 Windsor and the 400 V8 Cleveland V8s were introduced.

In 1972 the SelectShift Cruise-O-Matic transmission, power steering and power front disc brakes became standard equipment on all Monterey models. The 429 V8, which was standard on the Marquis since 1969, could now be replaced with the optional 460 V8. It was in this year that all Ford Motor Company engines began to run on regular, low lead or unleaded gasoline.

In the TV show Hawaii Five-O the first car the star, Steve McGarrett drove was a 1968 Mercury Parklane Brougham. This car was wrecked during filming the episode “Number One With A Bullet” in 1978. It sat for years, but was found in 1986 and rescued by a collector.

There were 5,635 Mercury Marauder X-100s built in 1969, and only 2,646 built in 1970. The matte-black paint that covered the trunk lid and rear window surround was a standard feature, but buyers could elect to delete it. Roughly half of the X-100s built did not have this area finished in matte-black.

What Would You Like More Information On?
Clicking on a Topic Below Will Jump You to That Section

The content MAC's presents on its "Vehicle Identification & Specification" pages & in its catalogs is for information use only and is intended to be used as a guide. While MAC's makes every effort to ensure accurate content, occasionally errors may occur. MAC's does not take responsibility & will not be held liable for any automotive parts purchases, repairs or restoration decisions made as a result of information presented here or anywhere in its catalogs.

Location: Rear face of the left (drivers side) front door

Location: Rear face of the left (drivers side) front door

The second character = Assembly plant where the car was manufactured.

The content MAC's presents on its "Vehicle Identification & Specification" pages & in its catalogs is for information use only and is intended to be used as a guide. While MAC's makes every effort to ensure accurate content, occasionally errors may occur. MAC's does not take responsibility & will not be held liable for any automotive parts purchases, repairs or restoration decisions made as a result of information presented here or anywhere in its catalogs.
( Back to Top )