Shortly after the end of WWII, the Ford Motor Company sought a new direction. Under the leadership of Henry Ford II, the company’s designers were challenged to create a car that was unlike anything offered by Detroit at the time. Introduced in mid-1948, the all-new 1949 Ford and Mercury Eight were radical departures from previous automotive design, and a stylish precursor of the cars that would follow throughout the 1950s. 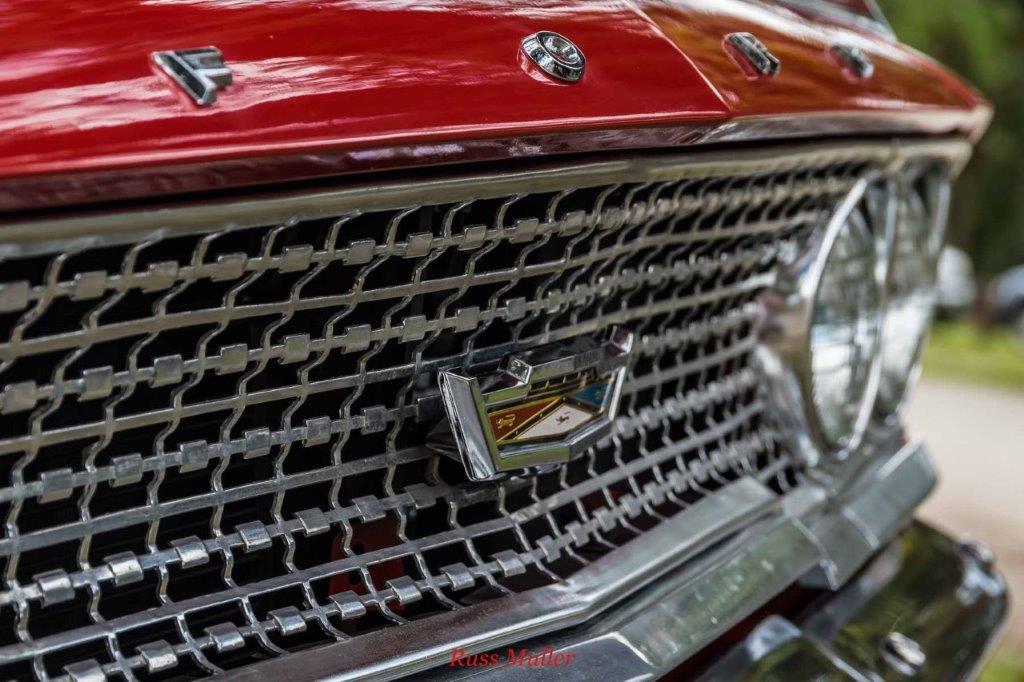 Perhaps the biggest break from the past was the 1949’s integral fender design. Unlike the bulging fender and body offerings that had preceded it, the ‘49 had a clean continuous line from the front fenders, through the doors, and on through the rear quarter panels. A smooth connection from grille to taillights took the eye over a sweeping silhouette. From its sleek chrome bullet nose at the center of the grille, on back to the horizontal taillights, the ‘49s were indeed unlike any other cars of their day. To this day, few other vehicles have captured car customizer’s attention like the ’49 Mercury. With few subtle modifications, these body styles were carried through the 1951 model year.

1952 brought new body styles featuring a one-piece windshield. The Ford Customline, Mainline and Crestlines of 1953 also boasted a one-piece windshield along with updated and modern interior fabrics. Ford's designers focused much of their energy on rooflines throughout this era, starting with the tinted plastic of the early Skyliners and Sun Valleys and culminating with the attractive stainless sweep of the 1955 and 1956 Crown Victorias, Montereys, and Montclairs.

New design elements of the decade were not limited to the body. The 1949 Ford would be the foundation from which many innovations and performance improvements would be launched throughout the 1950s. Coupled with the long-standing Ford Flathead V8 engine, Ford’s first automatic transmission, the Ford-O-Matic, would provide a landmark improvement in performance and drivability. 1952 brought an updated chassis and suspension features.

1953 marked the end of an era, with the last of the venerable Flathead V8 engines rolling off the assembly line to make way for the new overhead valve 239 and 256 cubic inch Y-block V8s. The horsepower wars were on, and Ford raced to keep ahead of the competition, eventually increasing the displacement of its Y-block to 312 cubic inches.

To house these modern powerplants, Ford introduced the longer, lower, and wider styling of the 1957 model line. This trend-setting year also included the introduction of the Skyliner retractable hardtop. The Skyliner’s transition from hardtop to convertible was carried out through a complex electrical system of relays, switches and motors that lifted the roof, and then smoothly lowered the hardtop into the trunk. Witnessing the rare retractable hardtop in action was a spectacle for its time, and one that continues to impress car show audiences to this day. 1957 also saw the introduction of the Ranchero, advertised as “More than a car! More than a truck!”

In 1958, Ford continued to pursue a competitive performance edge with the introduction of the "FE" series of big block engines, offering 332 and 352 cubic inch V8s, and the Cruise-O-Matic automatic transmission. 1958 also brought quad headlamps, as well as the 383 cu in (6.3 L) MEL V8. With the new engine came the Multi-Drive three-speed automatic transmission. The popular Galaxie nameplate was first unveiled in 1959 as a top of the line model. The model name would serve Ford well throughout the next decade and on into 1972. As the 1950s drew to a close, the end of the decade also brought with it the end of Ford's Skyliner retractable hardtop and full-sized Ranchero models. The Ranchero would continue, but as part of the Falcon line. A decade that started with a challenge to build a better car, 1950s can well be remembered as a time of numerous styling, performance and luxury innovations for both Ford and Mercury.

For 1960, the full size cars in the Ford and Mercury line were completely redesigned and, with the exception of engines and drivetrains, carried over little from the previous year. The restyling incorporated by Ford was apparent from bumper to bumper. Up front, one significant change in styling included moving the headlights from the fenders down into the grille. The traditional round taillights implemented by Ford in the past were dropped in favor of a new semi-circular design. The Galaxie continued to lead the way as the top-of-the-line model for full sized Fords.

Along with Galaxie, Ford also offered the full sized Custom 300, Fairlane, and Fairlane 500 models. A new body style for 1960 called the Starliner Hardtop had a distinctive roofline and was added to the top-of-the-line Galaxie models. Mercury retained the Park Lane as its top model, and continued offering the popular Monterey and Montclair models. 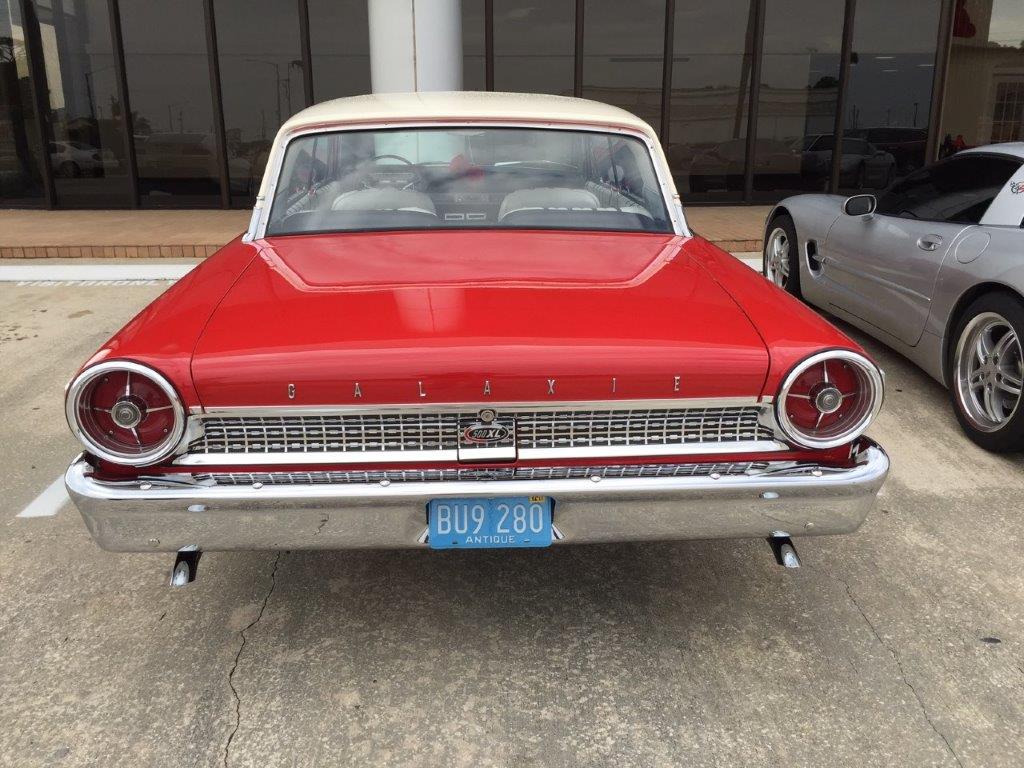 For 1961, Ford crammed more horsepower under the hood with three versions of the new 390 cubic inch V8, producing 300, 375, and 401 horsepower. Self-adjusting brakes became standard and the power steering system greatly reduced steering effort for the full size models. 1962 saw the introduction of a new downsized Fairlane, effectively dropping the model from the full sized Ford line-up. For 1962, the big cars again had a thorough restyling.

Two new Galaxie models were introduced; the Galaxie 500 and the Galaxie XL. The XL was a performance oriented version of the Galaxie and included a floor shifter and bucket seats. The Starliner 2 door hardtop was eliminated as an optional body style and Ford was poised to make its impact felt in the Detroit horsepower wars of the era.

In 1963, Ford offered even more engine choices and with them, more horsepower. The 406 cubic inch V8 was available with options that offered 385 or 405 horsepower, and the 427 cubic inch V8 boasted a staggering 410 or 425 horsepower. Both small block and big block V8's were available. Ford had a record production year with 1.5 million vehicles built. 1963 also saw new options available from Mercury. One notable style change, exclusive to Mercury, was the introduction of the “Breezeway” roof. The overhanging rear roofline held a rear window with a center section that could be electronically loGalaxie received new sheet metal for 1964 and the Custom 300 was retired and replaced by the Custom and Custom 500. The 406 cubic inch V8 was also retired for 1964.

The advertising slogan for 1965 full size Fords was, "Newest Since 1949." For the first time, big Fords used coil springs at the rear axle. 1965 also saw the introduction at mid-year of the top-of-the-line LTD. Performance remained a high priority in 1965 and into 1966. One available Ford engine of this era would reach legendary status, the SOHC 427. The “Single Over Head Cam” engine, or “Cammer,” was available in two versions, each offering over 600 horsepower. These two engines were not installed at the factory, but were available from the parts department of your local Ford dealer. Primarily developed for a racing application, the SOHC 427 was more than a handful on the road.

In 1966, the performance-oriented 7-Litre, boasting 345 horsepower from 428 cubic inches, was unleashed for a one-year run. The full size Fords received what at first glance looked like some modest appearance revisions for 1966, however, the fenders, doors, and quarter panels were actually entirely different designs from 1965. For its part, Mercury dropped the “Breezeway” overhanging roof design in favor of a cleaner, sleeker roofline were to provide ventilation and create an open cab atmosphere.

1967 was the last year without Federal safety and emissions regulations. Despite new features for the big Fords that included fingertip speed control, 8 track tape players, and SelectShift Cruise-O-Matic transmissions, sales declined. 1968 was the "Ford has a better idea" year. The Federal regulations were evident in every model and line from Ford Galaxie to Mercury Marquis. The 302 V8 was introduced.

For 1969, Ford’s new slogan was, "The going thing." The 351 "Windsor," produced in Ford's Canadian plant, made its debut, and the chassis and suspension were almost unchanged. A few styling changes, including longer hoods and shorter rear decks, altered the appearance of the big Fords and Mercurys. A new top-of-the-line series called the Brougham was added and the XL convertible and "Sportsroof" fastback hardtop were big sellers. The muscle car version of these models sported the four-barrel 429 cubic inch V8.

For 1971, the big Fords were restyled again. The XL series was discontinued but its convertible was moved to the LTD series. Front disc brakes were now standard equipment. 1972 was the last year Ford offered full size convertibles.

Edsel had its origins nearly 10 years before its release. As early as 1948, the Ford Motor Company was researching the production of a medium priced car. Ford’s goal was to retain Ford customers by offering them the option of trading-up incrementally from the Ford line all the way up to the Lincoln line.

In April of 1955, Ford established a “Special Products Division” with the objective of creating a new line of cars that would address the gaps between both the Ford and Mercury line, and the Mercury and Lincoln line. The car was known then only as the “E-car,” for experimental.

Every aspect of the “E-car” project was given extraordinary attention, right down to the selection of the name. Wanting to capture the excitement surrounding the new product line, Ford struggled to find a name that would fit the spirit of the project. The Ford Motor Company ultimately choose the name Edsel, in honor of Henry Ford’s only son, and in 1956 the “Special Products Division” was renamed the Edsel Division.

With a name in place and a design like no other, Ford set out to entice the public and create interest in the new Edsel line. An unprecedented promotional campaign included ads that created an air of expectation like never before for a new car. The publicity worked, creating much public speculation and excitement. With great fanfare, the Edsel made its public debut on September 4, 1957, weeks ahead of other makes for that year. 2.5 Million Americans made their way into showrooms on what was dubbed “E-Day”.

Initially, the promotion appeared to be a success, as it certainly created public interest in the car. However, it soon became apparent that, despite the crowded showrooms, few Edsels were being sold. Ford continued to aggressively promote their new line, but by the end of the year, one in which Ford expected to sell over 200,000 Edsels, they were faced with the disappointment of not even meeting one third of their projected sales.

It may have been a combination of factors that led to poor sales, but one thing was certain, the car buying public was less than enthused. In an effort to help their new line, Ford decided to make some changes. In January of 1958, Mercury, Edsel, and Lincoln were consolidated into one division (MEL).

For 1959 the Edsel product offerings were trimmed, but sales continued to slide.

1960 was to be the final year in the colorful history of the Edsel line. Sadly, just over a month after it's October 1960 introduction date, it was announced that the Edsel line would be discontinued. The production figure for 1960 was a mere 2,846 units, bringing the total 3 year run of one of America's most unique cars to 110,847.

Speculation over what caused the Edsel to fail continues to this day. Perhaps it was the styling, the confusion of filling two product line gaps with the same line, or maybe the name itself. Maybe, the Edsel line just couldn’t sustain the impossibility of living up to the hype created around its release. What is certain is that the Edsel remains one of the Ford Motor Company's and automotive history's biggest curiosities. Edsel has entered the American lexicon, a name synonymous with failure, but despite its short-lived production, it continues to live up to the claim, “Never before a car like it.”

A 1971 Ford LTD is driven by Burt Reynolds in the 1973 movie White Lightning.