Promoted for its great price and fuel economy

There were three generations of Ford Falcon between 1960 and 1970. It was offered in 4-door and 2-door sedan, 2-door and 4-door station wagon, convertible, 2-door hard top, sedan delivery and Ranchero pickup body configurations. 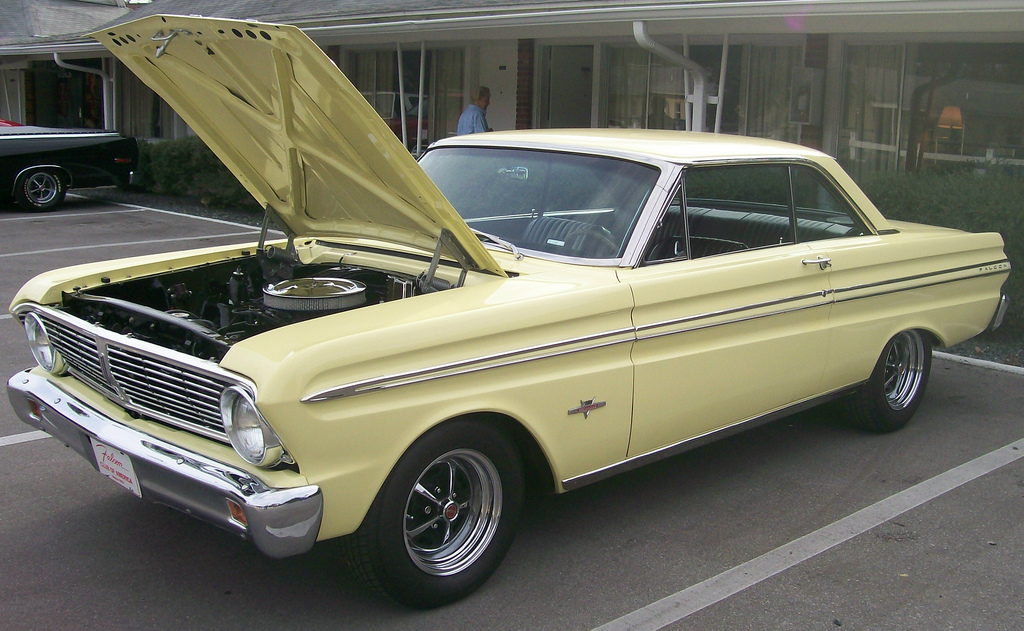 Promoted for its great price and fuel economy, the 1960 Ford Falcon was said to be “The New Size Ford”. It had a unibody construction and drum brakes. Powered by a 144 CID with 95 hp, it had a three-speed manual column shift with an optional two-speed Ford-o-Matic automatic. While the interior was simple, it was quite roomy. It didn’t have power brakes or power steering but economy was the goal, so it’s not really surprising.

In 1961 Ford boosted the Falcon’s horse power to 101 with a 170 CID six. A bucket-seat and console model called the Futura and a sedan delivery version were now available. Charlie Brown and Lucy, from Peanuts, were now on the Ford Falcon sales brochures and advertisements. The advertisements spoke of great fuel economy, with 30mpg. Almost one million vehicles were sold in these first two years.

The Squire model was introduced in 1962. It was a 4-door station wagon with faux wood trim on the sides. There was also the bucket-seat Futura model with an upgraded interior, safety belts, spear side trim and new emblems. During this year Ford decided to remodel the roof line at the back window and introduce a 4-speed transmission. The 2-door Futura sedan had chrome trim around the side window openings and was referred to an illusion hard top. No longer available was the wrap-around back window. Instead there was a flat rear window which was actually what all of the other Ford cars had at the time.

In 1963 Ford upped its game with even more designs and models. The 4-door Future, Deluxe wagon, Futura Sports Convertible and Futura Convertible were all introduced. There would be hard tops and a new Sprint model. 1963 was also the year the Fairlane 164hp Challenger 260 CID V8 engine was offered. Limited numbers of Falcons had the V8 option. Only 10,479 Sprint 2-door hard tops and 4,602 Sprint convertibles were produced.

In 1964 Ford decided to go after a younger market by redesigning the Ford Falcon with a more modern, square look. A Sprint Package was available, boosting the Falcon up to a 260 V8 and louder exhaust system. This car, however, didn’t really do well on the market, mainly because the Ford Mustang’s higher sales, and was discontinued in 1965. June 1965, would see the last of the Falcon convertibles.

In 1965 the Ford Falcon now had a 3-speed Cruise-o-Matic automatic transmission available and came with front seat belts. Power steering, power brakes, radio, remote-control trunk release, parking brake warning light and a padded instrument panel were all optional. Between 1964 and 1965, around 430,000 Falcons were produced.

1966 brought yet another redesign of the Ford Falcon. The car started to look more like a Mustang, with a long hood and short deck design. New to the 1966 Ford Falcon was the heater-defroster. Six cylinder Falcons now had 9-inch brakes and V8s had 10-inch brakes. The convertible was no longer available, and the two-door hardtop was discontinued. The Ford Ranchero and the station wagon were now on a larger platform along with the Fairlane.

In 1967 Ford added a reminder light for seatbelts in the Ford Falcon, and in 1968 they added square tail lights.

1970 was the final year of the Ford Falcon. The 1970 model did not have a locking steering column, while all other Ford vehicles did. The Ford Falcon wasn’t able to meet safety standards, so the 1970 model is actually identical to the Ford Falcon built near the end of 1969. Sales declined. In January of 1970 the Falcon name was now on a Torino platform and called a ‘70 ½ Falcon. It was available in 2-door sedan, 4-door sedan and 4-door wagon. Oddly enough, the ’70 ½ could be everything from a basic price leader to a top-performer since a variety of 429s, including the Super Cobra Jet engine, were available.

The Falcon name was also used on the Ford Econoline van, on its passenger versions.

There were different variations of the Ford Falcon produced in Canada, Chile, Argentina, Mexico and Australia.

The Falcon was created to be a small car in North America, but to be considered mid-sized around the world.

The 1960 Comet was produced on the Ford Falcon platform

The Comet was developed concurrently with the Ford Falcon and was first developed as a compact car in the Edsel lineup. When the Edsel brand was discontinued before the 1960 model year, Ford took the leap and released the Comet. When first produced the canted elliptical taillights were the same as the Edsel prototype design and also had the Edsel “E” part number. The initial Comet even had the parking lights and dashboard knobs from the 1959 Edsel, as well as the same shaped keys.

The 1960 Comet was produced on the Ford Falcon platform but had a wheelbase that was 5 inches longer. In 1960 there were two body styles available. The 2-door coupe, 4-door sedan and the 2- and 4-door station wagon. All were available with a standard trim and custom trim level, which included badging, all-vinyl interior and extra chrome. Only one engine was available, the 144 cid Thriftpower straight 6 with a single-barrel Holley carburetor. It produced 90 hp. There were two transmissions available; the column-shifted 3-speed manual and a 2-speed Merc-O-Matic automatic transmission.

In 1961 the Comet engine got an upgrade to the 170 cid straight-6 with a single-barrel Holley carburetor that kicked out 101 hp. This was due to the fact that the 1960 engine simply didn’t give enough power, resulting in a lot of complaints. There was now a new 4-speed manual transmission also available as an option. Visually the car didn’t change much, other than a new grille design and moving the Comet script from the front fender to the rear quarter. 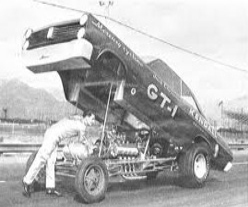 During this 1961 year, the S-22 option package was available for the Comet. It was available only for the 2-door sedan and really only included the S-22 badge, a center console, Moroccan vinyl bucket seats, and a spoked steering wheel with the S-22 badge in the center, better carpeting, undercoating and stainless full wheel covers, even though was promoted as a sport package.

In 1962 the Mercury Comet was officially made a Mercury Model. The trunk was redesigned and the taillight area was modified to make the Comet look more like a Mercury. Finally the Comet carried the Mercury badge. There was now the Comet Villager, which was essentially a Comet Custom 4-door station wagon with simulated woodgrain panels on the sides.

For 1963 a new convertible and hardtop coupe were added to the Comet Custom and Comet S-22 lines. The Comet’s chassis and suspension were modified to allow for an optional 260 cid V8 engine with 2-barrel carburetor and 164 hp.

1964 saw the introduction of a more square and boxy design for the Comet on the 1963 Comet unibody. The Falcon and Comet 2-doors now had sharper corners on their roofline, following on the success of the full-size Ford and Mercury fastback roofline. Model designations also changed. The S-22 was replaced by the Cyclone, a 2-door hardtop that came standard with console, bucket seats, and wheel covers that looked like chrome wheels. The trim levels were the Caliente, 404 and 202. These replaced the base and custom models. The 2-door station wagon was no longer produced in 1964, while the Villager was still the best station wagon. The base engine of the year was the 170 cid 6-engine after the base 144 cid 6-engine was discontinued. The 289 V8 was available in the middle of the production year, with the 260 V8 available from the beginning.

In 1965 the Comet got another style boost, with new front and rear design, with stacked headlights. The 6-cylinder base engine was now 200 cid with 120 hp at 4400 rpm. The base 8-cylinder engine was boosted up to 289 cid producing 200 hp. The 3-speed manual column-shifted transmission was standard, with an optional Merc-O-Matic 3-speed automatic transmission now available. The 289 V8 had three horsepower ratings available, the base 2-barrel 200 hp, 4-barrel 225 hp and the 289 cu with 271 hp and 4-speed manual transmission.

In 1967 only the base Comet 202 had the Comet name. It was available only in a 2 or 4 door sedan body style. Other models were referred to by what their names were earlier in the series. In 1967 Mercury’s mid-size cars include the base Comet 202, the Capri, Caliente, Cyclone and the Cyclone GT. There was still the steel-sided Voyager and the Villager station wagon with its simulated wood panels. The Mercury Cougar was introduced in 1967, which led to lower sales for the Comet. For the Mercury Cyclone the standard engine was the 289 V8 with 289 cubic inches and 200 hp. The standard Comet, however, could be ordered with the 427 cubic inch side-oiler engine.

When 1968 arrived, Mercury’s mid-size models were given a face lift, with new sheet metal and styling. It still had the 116 inch wheelbase, but now they now looked like full-sized Mercury models. They shared their chassis with Fords’s mid-sized Fairlane and Torino. The mid-size base model was now the 2-door coupe Comet, no longer referred to as the Comet 202. The Capri was replaced by the Montego, and the Montego MX replaced the Caliente. Both were only available as 2-door hardtops and 4-door sedans. For those who wanted more style and luxury, the Montego MX Brougham option package was available. The Cyclone convertible was now out of production and the hardtop coupes were available as Formal-Roof hardtops or Fastbacs.

In 1969 the front grille was changed, the headlight surrounds were removed and the tail lights were changed as well. Other than that there were not very many changes. In fact, this was the last year the Comet name would be on mid-sized model. The new Cyclone CJ and the Cyclone Spoiler were introduced. The GT option was only an appearance group option now.

519 Cyclone Spoiler IIs were made in 1969, each with 351 cid 4-barrel V8s. They came with two trim versions named after Mercury NASCAR drivers. The Cale Yarborough edition had red trim and a signature decal, while the Dan Gourney Spoiler had a dark blue roof and striping, and a signature on the lower white portion of the car.