The Bronco was an entirely new vehicle from Ford

In 1966, Ford entered the growing four-wheel drive recreational vehicle market with the introduction of the Bronco. Designed to compete against the Jeep CJ-5 and the International Harvester Scout, the Bronco was an austere four-wheel drive utility vehicle available as a Roadster, Sports Utility or Wagon. 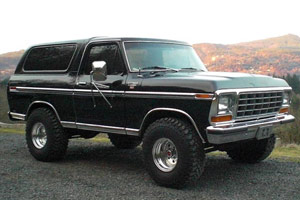 All three versions of the early Bronco were made from one body, as the roof for the Sports Utility and Wagon actually bolted on. The Bronco’s body was functional but simple, with an almost shapeless hood, flat glass, high front fenders, and an integral pickup box. The instrument panel was simple as well, and the windshield folded down if needed.

The Bronco was an entirely new vehicle from Ford, sharing little in regard to frame, body, and suspension with other vehicles in the Ford line. Its foremost chassis feature was its Mono-Beam front suspension system that, combined with a short 92-inch wheelbase, made it an ideal off-road vehicle. The early Broncos were sold without an automatic transmission or power steering as an option. A few options that were available included a tow bar, winch, snowplow and auxiliary gas tank.

For 1967, the Bronco was available with Sport package trim, and the Sport Utility was renamed the Pickup. Improvements included padded sun visors, backup lights, self-adjusting brakes, variable speed windshield wipers, and a dual master cylinder with a split hydraulic braking system as standard equipment. Little would change for the 1968 model with the exception of front side marker lights and rear quarter panel reflectors for safety.

In 1969, the Bronco Roadster was dropped from the model lineup and the folding windshield and removable top were discontinued. Many mechanical improvements were introduced, and the 9.375 inch clutch became standard equipment. The 302 V8 replaced the 289 V8 as an engine option. 1970 brought new color choices, marker light revisions, and optional Traction Lok and shoulder harnesses.

For 1972, vinyl bucket seats were now standard equipment on all Broncos, and eight new colors were available. This would be the last year for the T-handle transfer case shifter.

In 1966, the Econoline-based family of Club Wagons was broadened, and the interior trim scheme was improved. 1967 would be the final year of production for the first generation Econoline. New features for the year included a dual brake master cylinder, padded sun visors, 2 speed wipers, and back-up lamps.

In 1973, the Bronco Pickup was discontinued, but the style of the series was improved with the introduction of the Ranger trim package. A Cruise-O-Matic automatic transmission and power steering were available with the V8 engine option.

Although the Bronco, now available in only the Wagon body style, looked unchanged for 1974, nine new colors were available, as well as many improvements to the interior and the chassis. The refinement of the Bronco continued into 1975 with an improved fuel fill and exhaust system. New options included a reduced exterior noise package, 800 watt engine block heater, and Northland cold starting aids.

1976 and 1977 were the final years of the first generation Bronco design, and Ford did little to distinguish them from previous model years. They did upgrade to disc brakes as standard equipment, but dropped the economy minded six cylinder in favor of the 302 V8.

The next generation Bronco was introduced in 1978. With front-end sheet metal borrowed from the F-series pickup, these redesigned Broncos were wider, taller, and longer. More power was available as Ford’s 351 V8 was now the base engine, with the 400 V8 offered as an option. Trim levels were upgraded and the Ranger XLT package offered cut-pile carpeting, bright moldings, and chrome front and rear bumpers. The new design was well received and over 69,000 Bronco’s were shipped in 1978, more than doubling the sales of the previous year. With the wild success of the 1978 model, Ford chose not to change anything for the 1979 models and sales continued to rise, up to over 93,000 units.