Our showroom is currently closed, curbside pickup is available!

This was the year of the spinner wheel covers

The 4-door hardtop Impala Caprice was introduced in 1965, with new upholstery, wood-grain accents and special pulls on the inside of the doors. This was the year of the spinner wheel covers with the Chevrolet bowtie emblem in the center, as well a blackout rear trim strip under the tail lights with a Caprice by Chevrolet badge. The small-block and big-blog V8s were standard, as well as an inline 6-cylinder. The 1965 Chevrolet Impala Caprice had the option of a new three-range Turby Hydra-Matic automatic transmission. The 409 6.7-liter W engine was discontinued this year. In 1966 the new big-block V8s, the RPO L36 and the L72. The L72 would no longer be available in 1967. The I966 Impala SS would get new rectangular taillights and a chrome beltline strip, as well as new high-backed Strato bucket seats and new centre console.

The 1965 Bel Air was completely new both inside and out. Now 213.3 inches long, the new grille extended lower on the v-shaped bumper, the window glass was curved and the taillights were now round and mounted higher than before. Inside there was now a new glove compartment light, and a new dash. While the V8 was still the standard 283 CID model, there were now two optional 396 cu CID engines and two 409 CID block engines. The 1966 Bel Air had even more changes to its body, with a new grille and new blunted front fenders, as well as dual rectangular rear lights with built in backup lights. The station wagons had all-vinyl interiors and the sedans had cloth-and-vinyl trims. 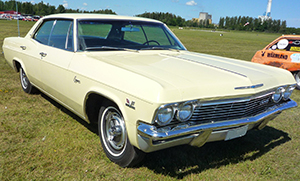 The 1965 Biscayne now had more engines available, including a 250 ci inline-6. It’s body was bigger while still being an affordable car. The new big block 427 ci V8 would be available for the 1966 Biscayne.

The Coke bottle style was big in 1967 and the 1967 Chevy Impala would have curves for days. A new collapsible energy-absorbing steering column, side markers and shoulder seatbelts were introduced to comply with new federal safety regulations. While the L72 was no longer available, a special L35 Turbo-Jet V8 could be special ordered. The 1967 Bel Air now had triple taillights and a bulging rear fender, and the same standard engine as previous year, but this time with optional engines being a 327 CID V8, a 396 CID V8, and a 427 CID V8. 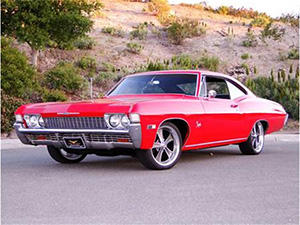 In 1968 the 2-door Impala Custom Coupe was introduced. Sales of the Impala SS dropped in 1968. The Super Sport was now an option package for the Impala convertible and the coupes. One of the most collectible cars today is the Impala with a Z24 package, which includes the SS427 emblem, pancake hood, and the three gills on the front fender. The Impala SS was only available as the Z24 (SS427) in 1969, with a 427 cu 7.0-liter V8. There was also the Z03 Impala SS this year, with its Impala Super Sport badge on the front grille, trunk lid and back fenders. The Biscayne station wagon was discontinued in 1968 and then sold as the Brookwood. From this year, 1968 through to 1972 the Nomad name, and the Nomad Custom, would be put on the low priced Chevelle 4-door station wagon.

In 1969 the Chevy Impala received new front bumpers and horizontal taillights in the rear bumper, and a relocation of the ignition switch to the steering column. A notchback roofline was now on the hardtop Sport Coupe. It was in 1969 that the Impala station wagons would be known as Kingswood.

The 1970 Chevy Impala would have a few upgrades, including new triple vertical taillights in the rear bumper and a new bumper under the grille instead of the wraparound bumper. The Turbo-Jet 454 big block V8 was available. The new B-body in 1971 was Chevrolets biggest car ever. In the meantime, the 1970 Bel Air got a new front end and would only be sold as a 4-door sedan. The Bel Air station wagon would be renamed the Townsman. Power brakes and power steering were now standard for the 1970 Biscayne. The Chevelle Nomad this year would get a new style, with the head lamps in their own chrome housing instead of being part of the grille.