The Chevy Impala was introduced in 1958

The Chevy Impala was introduced in 1958 and was one of Chevy’s most expensive passenger cars through to 1965. Known as the Bel Air Impala, it had a longer wheelbase and a 2-spoke steering wheel, as well as color-keyed door panels with aluminum trim, sculpted rear end, three tail lights on each side, crossed-flags insignias, dummy rear-fender scoops, bright rocker moldings and dual headlamps. The standard engine was a 283 cu V8, and an optional W block 348 cu Turbo-Thrust V8 was also available, with 250, 280 or 315 horsepower. The 1958 Chevrolet Bel Air had a variety of body styles and numerous options at the time, including the new Safety-Girder cruciform frame, with box-sectioned side rails and a boxed front cross member that went under the engine. 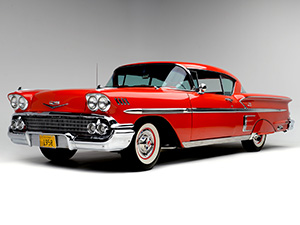 1958 was also the year the 2-door and 4-door Biscayne was introduced, with a focus on attracting buyer who wanted a full-size car without a full-size price. It was also in 1958 that the Chevrolet Delray became its own series. The 1958 Chevy Delray was longer and lower than in previous years, but limited interior and exterior trim and options, as it was positioned at the bottom of the line of the Chevrolet series. Police departments loved the Delray because of the economical attraction of this full-size car. Just about any engine and transmission choice was available to the buy, too.

One shouldn’t forget about the Chevrolet Yeoman and the Chevrolet Nomad that was also available during these years. The Nomad name was actually put on the 4-door Bel Air station wagon in 1958. Just like the rest of the 1958 Chevy full-sized cars, the Nomad had the Safety-Girder cruciform frame, box-section side rails, and a boxed front cross member. The Yeoman was an entry-level station wagon available in both 2-door and 4-door design. The Yeoman didn’t have a long production life, unfortunately, being dropped at the end of 1958. 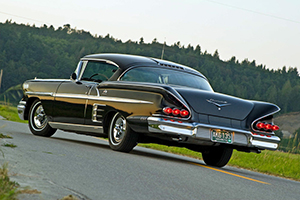 In 1959 the Chevrolet Impala got a new look, with a 1 ½ inch longer wheel base, new X-frame chassis, lower roof line, wider body, outward tailfins, and new teardrop shaped taillights. This was the year the Impala would become its own series, with a convertible, 2-door sports coupe, 4-door hardtop and a 4-door sedan. The 1959 Chevy Impala had standard features such as front and back armrests, clock, dual sliding sun visors and front vent windows, as well as new deep-set gauges on a contoured instrument panel. Options included a 6-way power seat function and the Speedminder. As for the 1959 Bel Air new fuel injection, lowered compression and special cams would boost horsepower up to 315 this year. In 1960 the Bel Air’s double cone tail lights would return and the car would see a less dramatic front end design. There was now a Bel Air Sports Coupe. During this 1959 year the Nomad was made part of the Impala model range, and was a 6-passenger car. It would get a new style in 1960.

The Impala’s rounded tail lights would return in 1960, with three on each side. There were now seven V8s available in either 383cu or 348 cu. While fuel injection wasn’t available on full-size Chevys any longer, speed control and cruise control were now available as options.

The Fleetmaster, a toned down version of the Biscayne, appeared in 1960. Lower-priced and really meant for the fleet market, it didn’t have amenities like door armrest, passenger-side sun visor, cigarette lighter or chrome plated parts, instead going for the more affordable painted parts. The Fleetmaster would only be in production until 1961. The Biscayne would have a full model facelift for 1961, and in 1962 there would be a 5-door station wagon available. 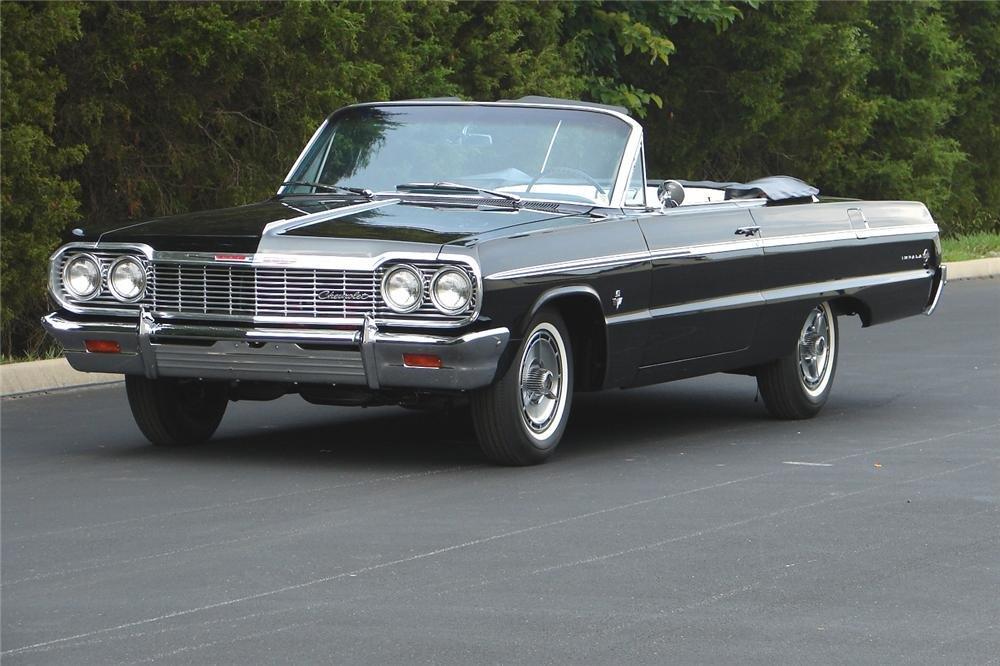 It was in 1961 that the Impala was on the GM B platform for the first time. A new bubbleback roof line was introduced this year for the sports coupe models. The rare 2-door pillared sedan came out this year, and the equally rare Super Sport option made an appearance. The 1961 Impala SS package was available on all of the Impalas and included better wheels, springs, sintered metallic brake lining, and shocks. There were only 142 1961 Impala Super Sports with the 490 cu 6.7-liter V8. This special appearance package would be available on the convertible coup and hardtop coupe only starting in 1962. From 1962-63 and in 1968 the SS was known as RPO Z03.

The 1962 Chevrolet Impala had a new C pillar style, with the exception of the 4-door hardtop. This was the year of the popular convertible roof style of the Impala Sport Coupe, which was shared with GM B full-sized hardtop coupes. Under the hood was the 380 brake horsepower 409 cu 6.7-liter engine and the 409 cu engine. Both came with a manual shift transmission. The Powerglide would be the only automatic transmission available until 1965 after the discontinuation of the Turboglide automatic transmission. Inside the Impala was all about style with truly plush, comfortable seating and an optional newly designed radio. The chrome trim on the outside was kicked up a notch with a wide panel made of chrome and aluminum, housing the taillight assembly. The Super Sport (SS) had a special engine-turned aluminum panel that filled the side moldings. The sheet metal on the Bel Air would be swapped out in 1962, as the body was lengthened to 209.6 inches. The 4-door sport hardtop Bel Air was no longer available. While the engines for the Bel Air were the same as they were in 1961, now available was a 327 cu V8, a 409 cu V8 with 380 horsepower or 409 horsepower with dual 4-barrel carburetor. 1962 Bel Airs now had carpeting as standard in all models.

It was in 1964 that the Chevrolet Impala would get a rounded look, with its recognizable inverted U shaped trim strip above the taillights and body-colored panel. The 1964 Bel Air, however, wouldn’t see very much updating other than standard trim and sheet metal upgrades.